With the launching of the latest H2020 calls, and would-be coordinators looking to create new consortia, this seems a good time to highlight the SHAPE ENERGY researcher database as a way to find partners working within energy-related Social Sciences and Humanities (energy-SSH). In this blog post Rebecca Spannenkrebs, Rosie Robison (ARU, UK) and Martin Anfinsen (NTNU, Norway) discuss the creation and evolution of our database as well as the energy research landscape across Europe more generally. Our hope is that this database will serve as a central resource for energy-SSH researchers looking to extend collaborations, but also for researchers in other fields searching for SSH expertise in order to ensure their project is better able to account for the social and human dimensions of energy, often an implicit aim of H2020 calls. 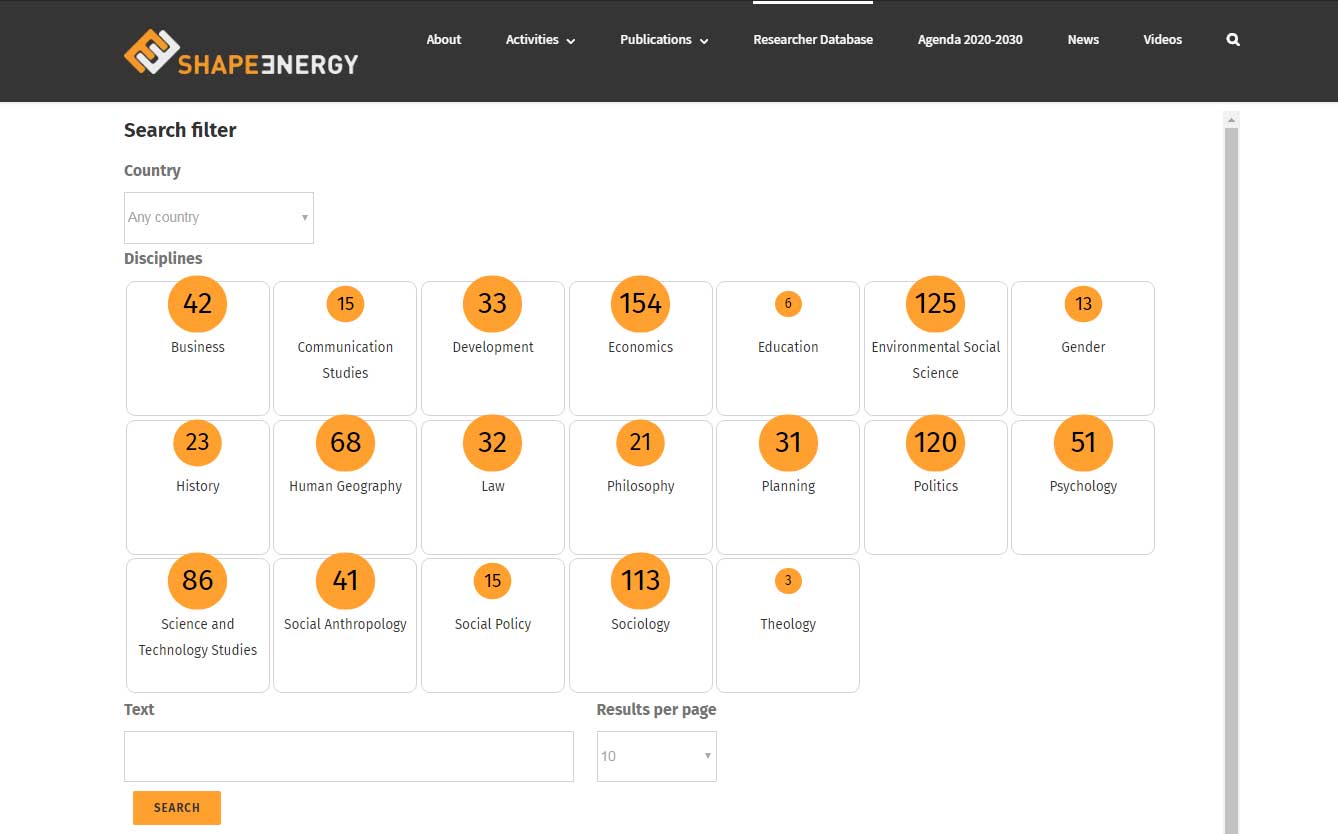 The database has a number of user friendly features, for example being searchable by country, discipline, name, and additional key words. It also brings up each researcher’s institute, job title, and weblink. The visuals offer quick overviews of the breadth of SSH disciplines the database seeks to include (also directly searchable), and the total number of researchers for every query given.

If we move a bit back in time, to the creation of the database, a first effort consisted of SHAPE ENERGY partners scoping the field in conjunction with the development of our comprehensive annotated bibliographies, and cross cutting theme reports. In particular, thematically and disciplinary relevant journals, conferences and networks were scoped during this endeavour for relevant researchers. Even though the effort was made to drag this net as widely as possible, it is indeed likely that the geographical situatedness of the partners involved has influenced the selection somewhat. The same can probably also be said for language barriers, with the English language being the obvious common denominator between the partners (and thus English language journals being more readily accessed). There is however ongoing effort to expand the database through approaching others at the institutions of researchers already within the database (with a particular view toward the countries with fewer researchers currently listed), and focusing on increasing numbers in underrepresented disciplines (e.g. energy-related Theology, Education and Gender). The attempt to compensate for imbalances is in other words already underway, but we are also relying on self-entries by the researchers themselves here, and the further circulation of this database to attract a wider variety of researchers.

We can compare these with figures regarding energy research more generally across the EU, as part of Horizon2020, and also energy-SSH research specifically. As map 2 below shows, if we look at countries leading energy-related H2020 projects we also see a trend toward Western Europe. It is notable however that Spain and Italy lead a very large number of projects, but have lower representation in the database so far. The comparison reveals the high potential of the SHAPE ENERGY database to collect and connect even more researchers in those countries, although it is important to note that the majority of partners within H2020 energy projects will be bringing STEM1 (rather than SSH) expertise.

Looking at the breadth in disciplines (see Chart), we find that Economics is the most represented discipline, followed by Environmental Social Sciences, Politics and Sociology. Up to now, the database contains fewer researchers in the fields of Theology, Education and Gender.

Map 1. Distribution of researchers in the SHAPE ENERGY database (so far) among European and associate countries 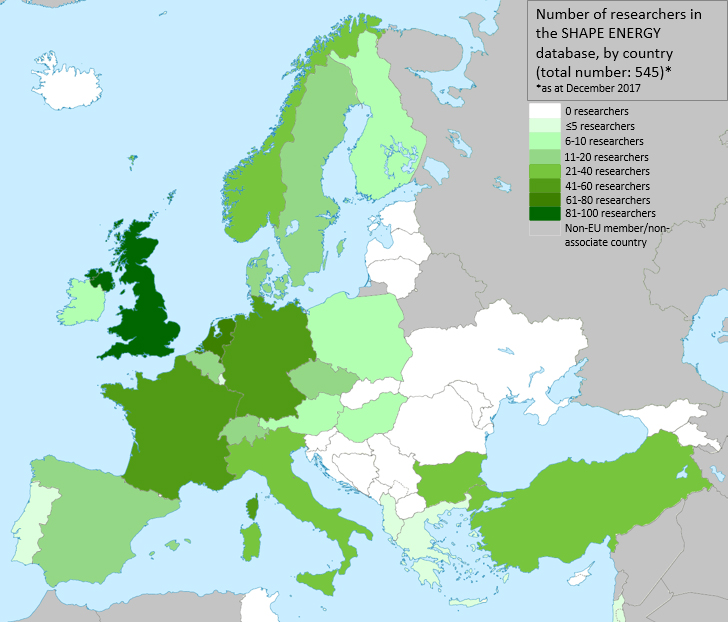 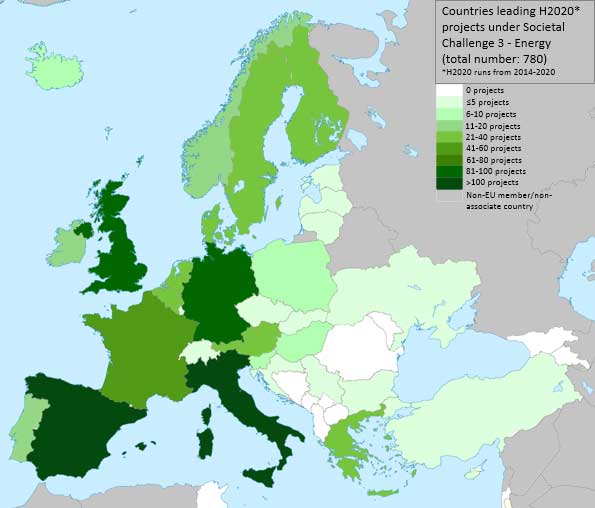 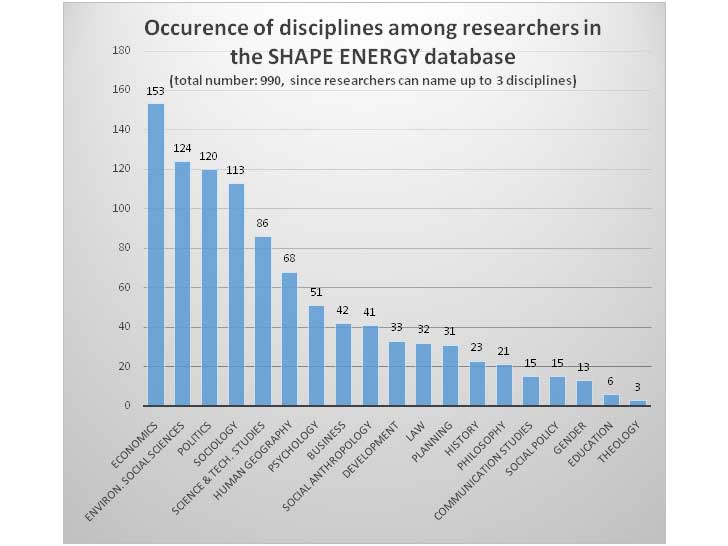 The growing numbers of researchers in the database hopefully serves to illustrate energy-SSH as an exciting and blossoming field. We also believe this to be a sign of the great number of energy researchers seeing the benefits of interdisciplinarity, and the value in forming international consortia when exploring energy related challenges.

Ultimately, a more geographically varied and disciplinarily broad energy-SSH database will help to make it ultimately more useful in reaching out beyond ‘traditional’ regions and fields.  So if you are a social scientist or humanities researcher working on energy-related topics and are not yet part of the database, you are welcome to add yourself (and circulate the invitation around your institute) and, thus, encourage others to get in touch with you. If you see any already established energy-SSH networks whose members are not included in the database, just notify the database lead, Martin Anfinsen. Martin should be on top of every contribution so far, and is eagerly anticipating every new entry that comes in!

Researchers may also be interested in being reminded of the opportunity to apply to become an expert evaluator for the European Commission. Calls in specific areas are regularly published on the EC website: http://ec.europa.eu/research/participants/portal/desktop/en/experts/index.html

This website uses cookies to improve your experience while you navigate through the website. Out of these, the cookies that are categorized as necessary are stored on your browser as they are essential for the working of basic functionalities of the website. We also use third-party cookies that help us analyze and understand how you use this website. These cookies will be stored in your browser only with your consent. You also have the option to opt-out of these cookies. But opting out of some of these cookies may affect your browsing experience.
Necessary Always Enabled
Necessary cookies are absolutely essential for the website to function properly. This category only includes cookies that ensures basic functionalities and security features of the website. These cookies do not store any personal information.
Non-necessary
Any cookies that may not be particularly necessary for the website to function and is used specifically to collect user personal data via analytics, ads, other embedded contents are termed as non-necessary cookies. It is mandatory to procure user consent prior to running these cookies on your website.
SAVE & ACCEPT
Go to Top